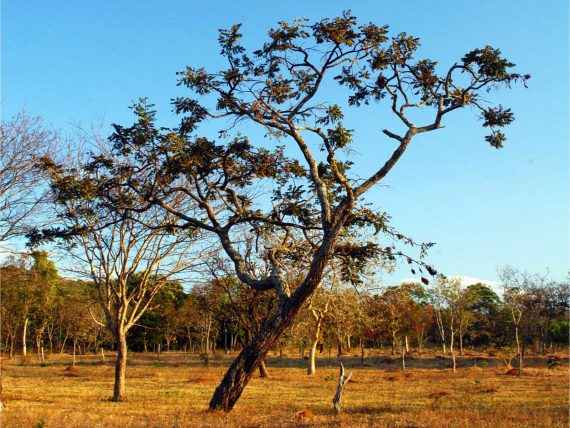 The advance of deforestation in Cerrado could result in the extinction of 1140 plant species over the next 30 years, a figure eight times greater than all plant species recorded as extinct since 1500 worldwide, shows an international study coordinated by Brazilian researchers published this thursday (23), in Nature Ecology and Evolution. On the other hand, the authors demonstrate that this scenario can be avoided without damaging agriculture. They point to a series of public and private policies already in progress or still in development that, if coordinated and focused on this objective, could avoid the projected extinctions.

According to Bernardo Strassburg, coordinator of the study, Executive Director of the International Institute for Sustainability and coordinator of the Centre for Conservation and Sustainability Science of the Department of Geography and Environment of PUC-Rio, the Cerrado has lost almost half of its area, but still harbors 4600 plant species that do not exist anywhere else on the planet. If the pace of deforestation continues, 30 years from now the Cerrado will be even smaller, losing a third of its current size, due to the expansion of soybean, sugarcane and pasturelands. In recent years, the Cerrado has already lost 88 million hectares, 46% of its native cover. Between 2002 and 2011, deforestation rates in the region (1% per year) were 2.5 times higher than in the Amazon.

“The Brazilian Cerrado is home to an enormous collection of globally unique plant species. What we have identified is that further deforestation will lead to plant extinctions on a scale that would dwarf all recorded plant extinction to date globally. This irreversible scenario would have serious impacts for national and international goals of safeguarding the diversity of life on Earth, and of avoiding dangerous climate change. It will also impact Brazil´s water and energy security”, says Bernardo Strassburg, coordinator of the study.

A combination of public and private policies, however, could help to avoid the collapse of Cerrado biodiversity. The researchers list eight strategic policies –already under consideration, or being implemented elsewhere in Brazil – that, if properly financed and implemented, could reconcile agricultural expansion and conservation. For instance, the Soybean Moratorium – a market ban on soybean grown in newly deforested areas – is already credited with nearly eliminating direct conversion of forests to soybean in the Brazilian Amazon. If extended, as advocated by the Brazilian Minister of the Environment, this would remove a key driver of deforestation in the Cerrado. Other key policies include the expansion of public protected areas, increased conservation finance (including climate finance) and the identification of priority areas for conservation, restoration and agricultural expansion.

“It is not necessary to reinvent the wheel, most of the necessary policies already exist and were used successfully in the Amazon in the recent past. What is needed now is to focus them on avoiding this looming extinction crisis. There is enough space to reconcile the increase in agricultural production and the conservation and restoration of critical habitats. It is not a simple task, but with a concerted effort of the stakeholders involved, both national and international, and the appropriate pressure from society so that key policies have the political and financial support needed, Brazil can turn a dismal scenario into a great success story”, says Dr. Strassburg.

The stark projections presented in the study also reveal a potential risk for the Brazilian economy, still reliant on exporting agricultural commodities. “The magnitude of the potential extinction crisis would jeopardize Brazil’s international reputation as one of the leaders in green economy and sustainable development. It would also make Brazilian agribusiness responsible for one of the biggest anthropogenic tragedies for biodiversity ever recorded, precisely at a time when the main global markets are pursuing goals for excluding supply chains associated with deforestation and environmental degradation”, adds Strassburg.

Researchers show that it is possible to meet all forecast increases in soybean, sugarcane and livestock production within already-cleared areas while also sparing additional land for restoration of native vegetation, as required by the Brazilian Forest Code. By increasing livestock productivity in already converted areas from 35% to 61% of its sustainable potential, it would be possible to accommodate more than 15 million hectares of expansion of soy and sugarcane, and 6.4 million hectares of restoration of native vegetation.

“The key to unlocking a sustainable future for the Cerrado lies in the potential for increasing cattle stocking rates – to make space for predicted crop expansion while at the same time sparing and restoring natural habitats for the region’s remarkable biodiversity. Given robust political support, disaster can be avoided”, Professor Andrew Balmford, Cambridge University.

‘’Increased cattle ranching productivity can be achieved through techniques that already exist, such as rotational grazing or feed supplementation. However, several obstacles, such as rural labour scarcity and financial constraints, must be overcome to assist producers in this transition” adds Dr. Agnieszka Latawiec, Executive Director of the International Institute for Sustainability and Coordinator of the Centre for Conservation and Sustainability Science of PUC-Rio.

This recovery of native vegetation plays a key role in preventing the projected biodiversity collapse: if it is carried out in priority areas for biodiversity, it could avoid up to 83% of projected extinctions. “The new National Policy for the Recovery of Native Vegetation, created by presidential decree last month, can help to promote this restoration in priority areas,” says Carlos Scaramuzza, Director of Ecosystems Conservation at the Ministry of Environment and one of the authors of the article.

The article entitled “Moment of truth for the Cerrado hotspot” was written by researchers from Brazil and other countries. The Brazilian researchers are from the Centre for Conservation and Sustainability Science of the Department of Geography and Environment of PUC-Rio; International Institute for Sustainability – IIS; Federal Universities of Rio de Janeiro (UFRJ), Minas Gerais (UFMG) and Goiás (UFG), the National Centre for Flora Conservation, and the Brazilian Foundation for Sustainable Development. The other authors are from the United Kingdom (University of Cambridge) and Switzerland (International Union for Nature Conservation).