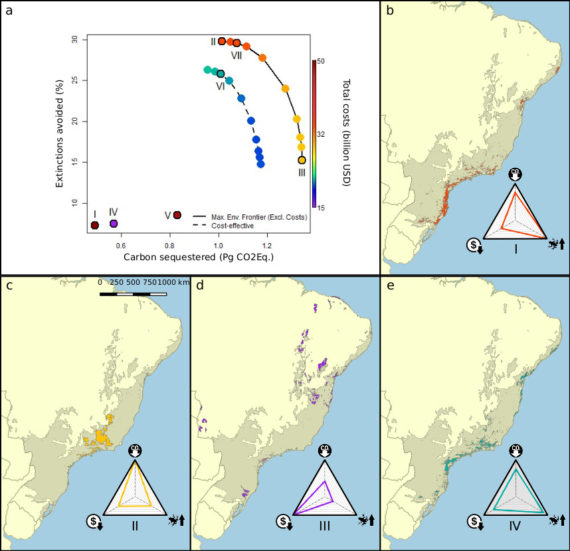 A new study from CSRio reseachers published in Nature Ecology and Evolution presents a novel approach to identify optimal priority areas for restoration, considering multiple criteria such as biodiversity conservation, climate change mitigation and reduction of costs. In a context of multiple local, national and global targets for ecosystem restoration, the study presents a flexible tool capable of increasing restoration cost-effectiveness by up to eight times.

“These restoration targets, if achieved, will bring multiple benefits for people and nature. But we show that using science to help deciding where to restore can multiply benefits and save billions of dollars in costs”, says Bernardo Strassburg, lead author of the study, coordinator of CSRio and director of International Institute for Sustainability (IIS)

The study involved 25 researchers from several countries and was focused in the Brazilian Atlantic Forest, a global Biodiversity Hotspot that has lost approximately 80% of its natural cover. Brazil´s National Plan for Native Vegetation Recovery aims to restore 12 million hectares of natural vegetation, approximately 5 million of which in the Atlantic Forest. The researchers engaged with the Brazilian Ministry for the Environment since the study design, and its results are now going to be used to help defining the priority areas for restoration in the Atlantic Forest biome.

Studies of priority areas setting largely focus on the conservation of existing habitats, when the distribution of species and carbon stocks can be observed in the field. Applying this approach to restoration presented unique challenges, as the distribution of its potential benefits had to be modelled. The research group estimated the original (pre-human disturbance) distribution of 762 endemic species, the potential sequestration of carbon dioxide as the forest would regrow and the costs of restoration, all of it across 1.3 million pixels of one square kilometer each.

If focused on biodiversity conservation, restoration of 4% of the biome could save 30% of its species from extinction; if focused on climate change mitigation, the regrowth of the forest would remove 1.3 billion tonnes of carbon dioxide from the atmosphere. But these solutions that focus on only one of the goals are not very effective for the other goal and are very expensive. The solution that focus on climate change, for instance, would only deliver half of the avoided extinctions that the biodiversity focus solution could bring.

This is where the multicriteria part of the algorithm developed comes in. By searching across 363 different scenarios, the study identifies some that perform very well for both objectives while keeping costs low. One such solution, labelled as the “Compromise” scenario, could deliver 94% of the maximum gains for biodiversity, 79% of those for climate change, while achieving 83% of the maximum reduction in costs possible. When compared with a baseline scenario where no spatial intelligence is applied and restoration is spread throughout the biome in small patches, this compromise solution increase benefits for biodiversity conservation, climate change mitigation and costs reduction by 257%, 105% and 57%, respectively.

“Societies throughout the world have decided to go on this remarkable journey of recovering nature at a truly planetary scale. It is perhaps an unique opportunity, and by applying spatial intelligence to it we can have vast benefits while keeping costs at the low end. It is an approach that shows a practical way of reconciling the interests of nature conservation and agricultural production”, complements Strassburg.