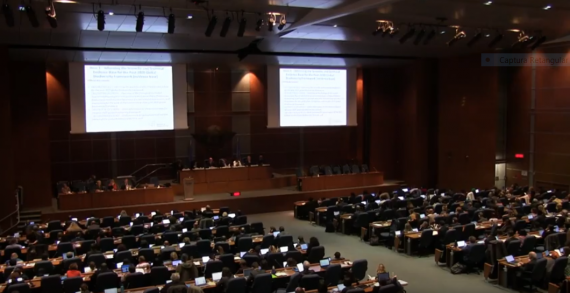 Some 500 delegates representing 118 countries are expected to convene in Montreal for the twenty-third meeting of the Subsidiary Body on Scientific, Technical and Technological Advice (SBSTTA-23), being held from 25-29 November. Amongst other agenda items, the SBSTTA-23 will inform the scientific and technical evidence base for the Post-2020 Global Biodiversity Framework.

Bernardo Strassburg, CSRio coordinator is one of the Brazilian representantives, and will be speaking at two side events:

“NatureMap: a new global effort to make biodiversity and ecosystem services hotspots visible”, on the 25th; and “One or a small number of overarching objectives (‘apex goal’) – proposals from science”, on the 26th.

The Subsidiary Body on Scientific, Technical and Technological Advice (SBSTTA) is one of the CBD’s two subsidiary bodies and meets annually. SBSTTA’s mandate is, among other things, to provide assessments on biodiversity, assessments on the efficiency of measures taken under the CBD, and support for the implementation of the programmes of work of the Conference of the Parties and the Strategic Plan for Biodiversity 2011-2020.