Global biodiversity policy is at a crossroads. Recent global assessments of living nature and climate show worsening trends and a rapidly narrowing window for action. The Convention on Biological Diversity (CBD) has recently announced that none of the 20 Aichi targets for biodiversity it set in 2010 has been reached and only six have been partially achieved.

Against this backdrop, nations are now negotiating the next generation of the CBD’s global goals [see supplementary materials (SM)], due for adoption in 2021, which will frame actions of governments and other actors for decades to come. In response to the goals proposed in the draft post-2020 Global Biodiversity Framework (GBF) made public by the CBD (5), we urge negotiators to consider three points that are critical if the agreed goals are to stabilize or reverse nature’s decline. First, multiple goals are required because of nature’s complexity, with different facets — genes, populations, species, deep evolutionary history, ecosystems, and their contributions to people — having markedly different geographic distributions and responses to human drivers. Second, interlinkages among these facets mean that goals must be defined and developed holistically rather than in isolation, with potential to advance multiple goals simultaneously and minimize trade-offs between them. Third, only the highest level of ambition in setting each goal, and implementing all goals in an integrated manner, will give a realistic chance of stopping — and beginning to reverse — biodiversity loss by 2050. 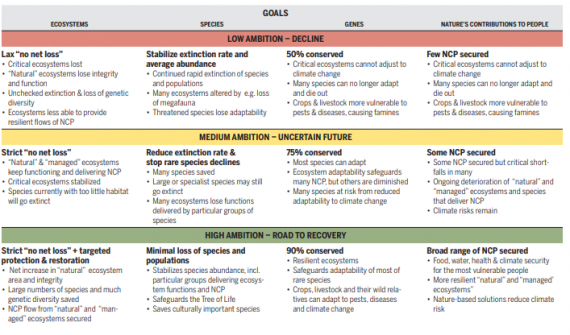 Columns show different facets of nature and its contributions to people (NCP). Each cell shows a potential goal (in bold) at a particular level of ambition in attaining it, and some consequences of reaching it, including effects on the other facets of nature and NCP. Only the scenario in green would contribute substantially to “bending the curve” of biodiversity loss. See supplementary materials for further details


< Previous Next >
Back to Publications