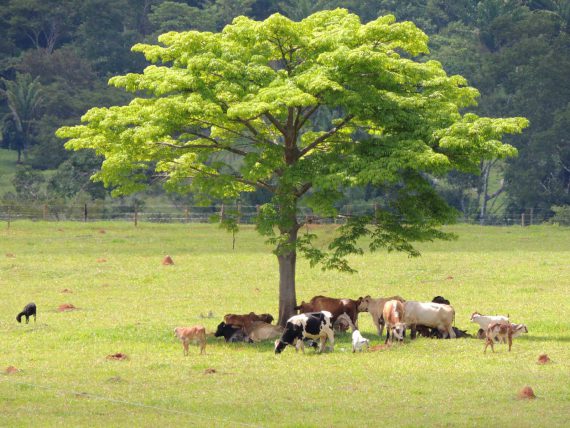 Lack of labour is pointed as the main barrier for the adoption of good agricultural practices in Brazil – A study with 250 producers from Mato Grosso was conducted by the CSRio and IIS
Monday March 20th, 2017

A study coordinated by the Executive Director of the International Institute for Sustainability (IIS), coordinator of the Centre for Conservation and Sustainability Science (CSRio) and Assistant Professor of the Department of Geography and the Environment of the Pontifical Catholic University of Rio de Janeiro (PUC-Rio), Agnieszka Latawiec, and 10 other experts from collaborating institutions from Brazil and abroad, shows that the lack of labour is the principal barrier that affects the adoption of good agricultural practices in Brazilian cattle ranching (indicated by 36% of the 250 producers from the Amazon; Mato Grosso state). The high costs of implementing these good practices were pointed out as the second most important bottleneck (according to 18% of the interviewed producers).

It was also found that even though credit is theoretically available it is not necessarily accessible to the producer because of bureaucracy issues. Shortfall in access to technical extension services was also identified to be a significant problem because 40% of the technical assistance is currently provided by vendors of fertilizers and other chemicals. The study, which generated the article ‘Improving land management in Brazil: A perspective from producers’ published in a scientific journal Agriculture, Ecosystems & Environment also identified that for the most of respondents (60%) the main benefit of adopting good agricultural practices was increased productivity, followed by an increase in income (43%) and a better administrative management of the farm (34%).

According to Agnieszka, this is the first study to systematically and quantitatively assess the barriers and conditions for adopting good agricultural practices in Brazilian pasturelands, taking into account the opinions of the key actors involved in the implementation of these practices in the Amazon – the producers. “It is absolutely essential to listen to producers’ voices in order to achieve more sustainable land use in Brazil. There are few studies of this kind and it is necessary to bridge the gap between the producer (in a systematic, quantitative and statistically robust way) and bring this information to decision makers.”

“In Brazil low productivity pasturelands are still predominant in relation to their sustainable potential and that has important social and environmental consequences, such as deforestation. Currently, the average productivity of pasturelands in the studied region is approximately one animal head per hectare. The sustainable potential is at least double that. In some areas of Brazil current productivity of pasturelands is even lower than one head per hectare. In the past, vast areas were deforested to support extensive cattle ranching’’ Agnieszka explained.

Adoption of good practices in cattle ranching can help rural producers improve pasture quality and increase productivity (heads per hectare). But the study also points to the possible opposite effect of this ‘sustainable intensification’ – a so called rebound effect. “It is very important that any intervention on land, such as intensification, is done in an indeed sustainable way: increase productivity but not increase too much, without over intensification and complemented with public policies focused on conservation to avoid expanding of this new intensive systems that could cause more deforestation” underlines Bernardo Strassburg, coauthor of the paper and the Executive Director of IIS.

The study also highlights other possible impacts of extensive cattle ranching such as soil degradation, water pollution, compromising animal wellbeing and rural poverty. ‘’Therefore, failure to consider the producer’s opinion will contribute to the continued clearance of native vegetation and the environmental degradation of existing pasturelands, in addition to the persistence of widespread poverty among cattle ranchers’’ concluded Agnieszka.